Congratulation to our sixth grade boys basketball players for bringing home the Championship!

The boys started this tournament off on Wednesday with victories over Prairie du Rocher and Coulterville who finished 5th in the tournament.  This set the stage for the semifinal game against Red Bud Elementary School on Saturday afternoon.  The boys were able to wrestle a victory away to earn the right to face Smithton in the Championship game on Sunday afternoon.  The final game was a real treat with multiply ties and a few lead changes.  The Cougars were able to put the game away in the final minutes by hitting 8 of 10 free throws during the fourth quarter. 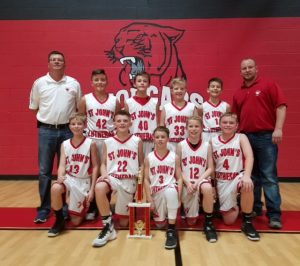